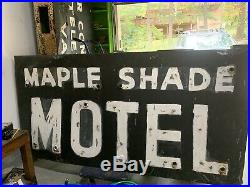 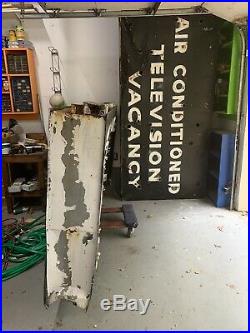 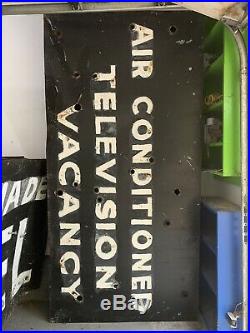 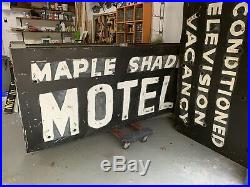 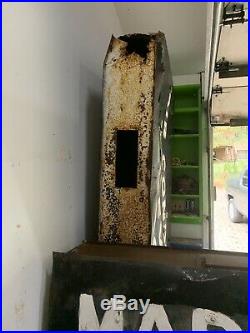 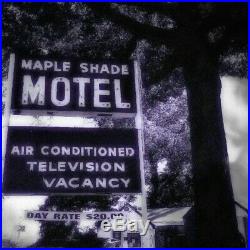 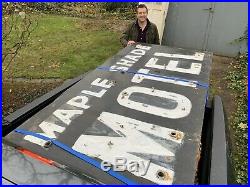 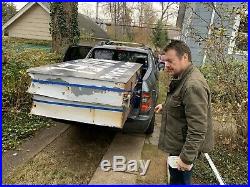 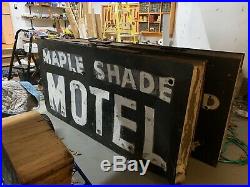 Vtg MAPLE SHADE MOTEL Ramsey Bergen County NJ Sign Painted 40s 50s Neon Old +1. Sign is from the old Maple Shade Motel on Route 17 in Ramsey New Jersey. Dates from approximately the 1940s to 1950s. Painted over many times, great patina. Measures about 4′ x 8′ x 11 – conveniently, the right width to fit into a truck bed. No neon or transformers left. This motel was a roadside mainstay in Bergen County. The classic show’The Sopranos’ was featured in a Season 6 episode there, as well. Great piece of American roadside history! As you can see from the photos, the signs have been bashed around a bit (easy to bash back) and there is some corrosion and general wear and tear – which is all part of the character. It would be wonderful to fit these with neon again but alternatively they could be touched up a little and hung, or just hung with the old patina, rust and imperfections intact. Was the 70th episode of the HBO original series The Sopranos and the fifth of the show’s sixth season. Written by Terence Winter and directed by Steve Buscemi, it originally aired on April 9, 2006. Summary of Episode 70. A judge decides Junior’s mental condition has deteriorated to the level where he can be held in a private psychiatric facility while awaiting his retrial. Tony does not want to see or hear of his uncle again. Carmela quickly fetches a newspaper with a report of Junior’s cushy psych lockup. She throws that section in the trash before he can see it. At the Bada Bing, Ahmed and Muhammad ask Chris about getting some Tec-9 semi-automatic weapons for their “family troubles”. Johnny is granted a six-hour strictly controlled release from prison in order to attend his daughter Allegra’s wedding, all extra security expenses to be borne by him. At the wedding, Tony collapses bending down to remove his shoes at the request of U. During the reception, he accepts an envelope of cash from Vito and is able to talk to Johnny for the first time since his arrest. Tony has already received Johnny’s request, through Phil, to take care of killing New York capo Rusty Millio; Johnny fears he may wage another power struggle in the Lupertazzi family; Tony has refused. As a personal favor, Johnny himself asks Tony to do it. Marshals, they join Johnny’s aged family relations, either deaf or senile, at a large table and, pretending to speak to them, discuss the situation obliquely. Tony reluctantly agrees; when he tells Chris, he opposes it. Johnny’s happiness at the wedding is cut short when the Marshals tell him his time is up. He cries in front of the guests as Marshals haul him away. His wife Ginny faints. Led by Phil, the Lupertazzis and Tony’s crew speak of their loss of respect for Johnny: if the Feds can make him cry, what else can they make him do? Only Tony stands up for him. At home later that night, Vito tells his wife he is heading out to make collections, but instead goes to a gay club. Dancing in leather fetish garb, he is spotted by two New York associates making collections. Although Vito tries to pass it off as a joke, they call him a “fag” and leave. Vito collects a gun and some cash from home and checks into THE MAPLE SHADE MOTEL, WHICH IS FEATURED IN INTERIOR AND EXTERIOR (NIGHT-TIME) SHOTS. He has a new bodyguard and driver, Perry Annunziata, a muscular, hot-headed young man. Tony displays his scar to his crew, and begins to bore them describing his medical procedures. Melfi that they are giving him “certain looks” and are beginning to question his judgement. She advises him to “act as if you are not feeling vulnerable”. Tony asserts himself through an act of unpredictable violence. He manufactures a confrontation with Perry, claiming he slammed the fridge door. There is a one-sided fight that ends with Perry bleeding on the floor and Tony defiantly walking away, seemingly unscathed. But he retreats to the bathroom and vomits blood. Leaning on the bathroom sink and looking at himself in the mirror, Tony gives himself a twisted, satisfied smile. The moment is short-lived, however, as he violently vomits again. The item “Vintage MAPLE SHADE MOTEL Two Neon Signs Sopranos Ramsey New Jersey Painted” is in sale since Wednesday, November 13, 2019. This item is in the category “Collectibles\Advertising\Merchandise & Memorabilia\Signs\Original\1930-69″. The seller is “doubledeuce12″ and is located in McLean, Virginia. This item can’t be shipped, the buyer must pick up the item.